We must take a look again at the Ascending Corridor, which we have a little spoken about, but having its nodus.
It goes up from the intersection point with the Descending Corridor, but in abnormal way. Instead of being built by well-arranged blocks, for the first twelve meters it passes through a series of large limestone blocks placed transversely to the corridor, so it was probably excavated a posteriori through them.
This particular arrangement, according to me, is due to the need to get, within a preexisting rocky protuberant of the bedrock, a cavity I’ll describe toward the end of this book and I call "the mouth".
This cavity, dug into the rock, is perhaps the point from which the construction of the whole pyramid began, and the crude limestone blocks, described above, had the purpose of linking the small bedrock protuberance of the with the rest of the pyramid. 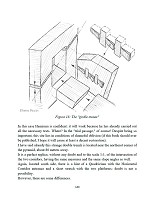