11 The Mystery of the Three Objects

I remember that the ducts of the Queen’s Chamber were discovered almost by accident, since they had no opening directly within the interior of the room. Only the cracked sound in response to a coarse acoustic survey, followed by breaking hastily done with chisel and mallet, made their discovery possible.
As a teaser that might be considered enough, but alas, there’s more: after the two thin diaphragms of limestone have been broken, the ducts show a short horizontal path, just crossing the wall, then go up.
After being opened, in the horizontal part of the north duct were discovered three objects, the only ones ever found inside the pyramid.
They were a wooden handwork bearing special marks, a double copper hook similar to an anchor, and a ball of hard stone—diorite, I think. 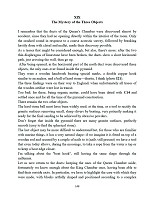 The Mystery of the Three Objects