Returning to the Quadrivium, described earlier, we may deal with another part of the pyramid also subjected to numerous conflicting theories.
That is the Service Shaft: a tunnel that follows a tortuous path downward until it joins the Descending Corridor on the west side, just few meters before the horizontal passage leading to the Subterranean Chamber.
It starts with the trapezoidal niche carved in the west platform between the first and the second pits (the ones without niches).
This cavity was not made during construction; instead it, even carved with extreme care, has been excavated a posteriori, as well as the rest of the shaft 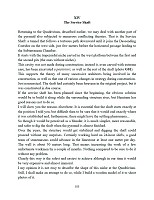