Now imagine passing under the block with the grooves and advance along the short passage that leads to the King’s Chamber: the block on the right side, currently broken into three parts, was originally a single granite monolith having the remarkable length of 2.55m (4c + 6p).
On the east side we find two blocks side by side, also in granite.
The floor at the entrance of the King’s Chamber shows a modest little step up of a couple of centimeters on the east side and a few millimeters more on the west side.
I am convinced that it originally did not exist having been formed by successive adjustments over the centuries, as well as at the same time the whole room has rotated slightly down on its south corner. This rotation justifies the non-perfect horizontality of the floor as well as the little step.
Obviously, I’m not the only one who thinks so: originally the passage floor was perfectly aligned with that of the King’s Chamber. 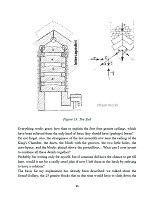